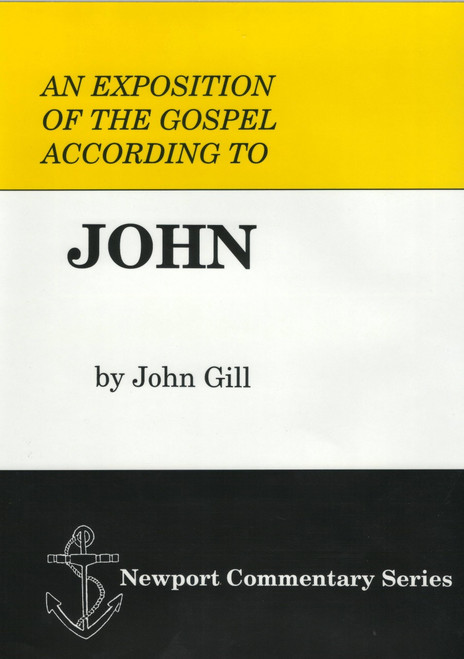 This Exposition of the Gospel According to John was originally presented in the form of sermons delivered by John Gill to his London congregation, and then published in Volumes One and Two of the three - volume set entitled An Exposition of the New Testament (London: Aaron Ward, 1746-1748).

Gill’s Exposition of the Old and New Testaments has long been esteemed by all who love faithful exposition of God’s Word.  In this first separate printing on the Gospel of John, the truths of God’s Word are set forth in a richly edifying manner.  Drawing on a wealth of Rabbinical literature with which to illustrate the text, Gill presents the reader with a solid and sensible commentary while at the same time not losing sight of the spirituality of the Word, nor of its chief subject, the Lord Jesus Christ. Dr. Greg Wills writes:

John Gill’s commentaries are among the best in the history of the Christian church.  They are helpful like few others.  Gill explains the text with unusually sound judgment and sensitivity to the entire canonical context.  With spiritual wisdom he is attentive also to the text’s application to Christian living.  His knowledge of Jewish backgrounds and of the rabbinic tradition was probably unsurpassed in his generation.  This knowledge affords him additional helpful insight into the scriptures.  His commentary on the Gospel of John is greatly enriched by the unique perspective this expertise provides.

Baptists and other evangelicals in Gill’s day admired him for his learning and orthodoxy as well as for his spirituality.  Evangelicals in London appreciated his uncommon wisdom in the scriptures and endowed a Wednesday lectureship for him.  For two decades they sat attentively to hear his expositions of the Bible.

It is needless to remark that we will not agree with Gill at every point, but that does not detract in the least from the immense value of this commentary.  Evangelicals of former generations, especially Baptists in England and America, deeply prized Gill’s commentaries.  Those of our generation would do well to prize them again.

As in our previous commentary on Romans, Gill’s references to the Apocrypha have been cited in full.  This, along with another valuable suggestion – to include Gill’s numerous references to his notes in the earlier Gospels and elsewhere as endnotes, have greatly aided in making this present commentary a self-contained work.  We trust that under God’s blessing, this new edition of John Gill’s Exposition of the Gospel According to John will prove to be, as it was to our forefathers in the faith, a wellspring of truth to all those actively engaged in the spread of the gospel.

Typeset in easy-to-read print. This second revised edition includes a 16-page historical essay, “Friends of this Valuable Author: Recovering the truth of how the founders of the General Missionary (or Triennial) Convention of Regular Baptists in America viewed the beginnings of the modern missionary movement and the theology of John Gill.”  742 pages.  Portrait.