Calvinism and Communion in Victorian England 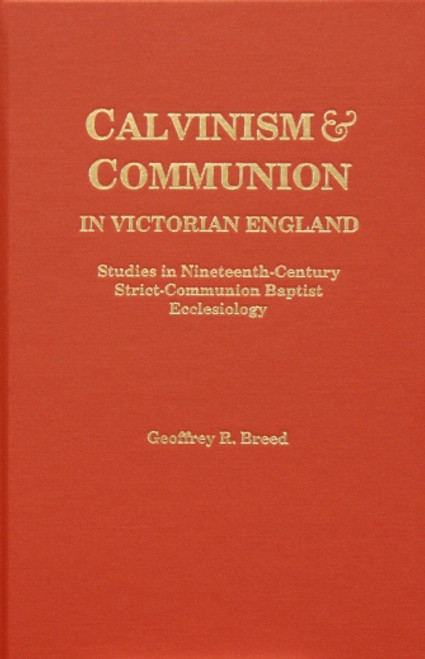 Calvinism and Communion in Victorian England

“This study illustrates tensions between Particular and Strict Baptists during the first quarter of Queen Victoria’s reign.  Two hitherto untapped sources of Baptist history are explored: the Minutes of the London Association of Strict Baptist Ministers and Churches (LASBMC), 1846-1855 and the Ramsgate Chapel Case of 1862.

At the beginning of the nineteenth century almost every Particular Baptist church in England practiced strict or closed communion, insisting upon believers’ baptism by immersion as the prerequisite to both membership and communion.  As the century progressed, some Particular Baptist churches opened their communion table to those of the household of faith who had not been baptised as believers.  Nevertheless, they still classified themselves as Particular Baptist churches.  They followed the teaching of Robert Hall Jr. (1764-1831), who argued functionally from God’s blessing on united missionary endeavour that the union which God chose to bless in mission ought not to be divided at the table.  Others adhered to the teaching of Joseph Kinghorn (1766-1832) and his disciple, William Norton (1812-1890), who held that, unless Baptists made believers’ baptism an essential qualification for communion, they would lose all distinctiveness.  This ‘strict’ position was the basis of membership of the LASBMC, an association which functioned from 1846 to 1855.” — from the author’s Preface.

This book also re-examines the views of C. H. Spurgeon on the Communion issue in light of an interview he had late in his ministry with a Virginia Baptist pastor and contains a reprint of David Griffith’s outstanding treatise on “Baptist Associations and Articles of Belief” (1840), in which he argues the necessity of having stated doctrinal beliefs.

Hardbound in dark red grade B cloth vellum with black spine label and gold stamping.  646 pages.  Illustrated.  Comprehensive Index of Persons, Subjects and Churches.  [Note to our customers in Great Britain:  this title is also available directly from the author, Geoffrey R. Breed, 14 Cleave Road, Gillingham, Kent, ME7 4AY, who has a quantity of these on hand.]

John H. Y. Briggs, Director of Baptist History and Heritage Centre, Regent’s Park College, University of Oxford, Editor of The Baptist Quarterly and formerly a Pro Vice-chancellor in the University of Birmingham writes:

“There is good reason for this large volume at nearly 650 pages in that it both makes available a goodly array of source material and provides expert commentary and analysis of its significance.  The source material includes association minutes, now unreadable in the original, here transcribed for the first time, circular letters, theological tracts and pamphlets, and contemporary newspaper reports and etchings, all so useful to those not within travelling distance of a major specialist library and archive, or more narrowly Oxford.  The witness of the ‘Strict and Particular’ is here expertly assessed.  Both adjectives have a distinct function for many General Baptists practiced strict communion, and, as the Ramsgate Chapel case, here now documented to put alongside the more famous Norwich Chapel case, a commitment to strict communion.  This assessment and documentation should find a place in every Baptist institution’s library.”

“Geoffrey Breed, an English Baptist bibliophile, in his groundbreaking Particular Baptists in Victorian England (2003), shed light upon those nineteenth-century Calvinistic strict-communion, strict-membership Baptist churches and pastors who through the Strict Baptist Society and the Baptist Tract Society sustained a distinctive witness while being in fellowship with the Baptist Missionary Society and are to be clearly differentiated from the separatist followers of William Gadsby.  Now in this volume he carries forward his research by examining the minutes of the London Association of Strict Baptist Ministers and Churches (1846-55) and related documents and the Ramsgate Chapel case (1862), in which a leading benefactor to the congregation lost in court in her effort to prevent the pastor from practicing open communion.  Breed has greatly contributed to an understanding of a group of Baptists heretofore generally neglected by historians of the English Baptists.”

"Calvinism and Communion in Victorian England. What a treasure trove of interesting information about Baptist position and practice in 19th century England, with surprises at the end of the book in the form of a letter (Appendix A), a tract (Appendix B), and a recounting of a conversion between an American pastor and C. H. Spurgeon about open versus close communion. It is a challenging read, admittedly. However, it gets easier and more interesting as you go."  -- John