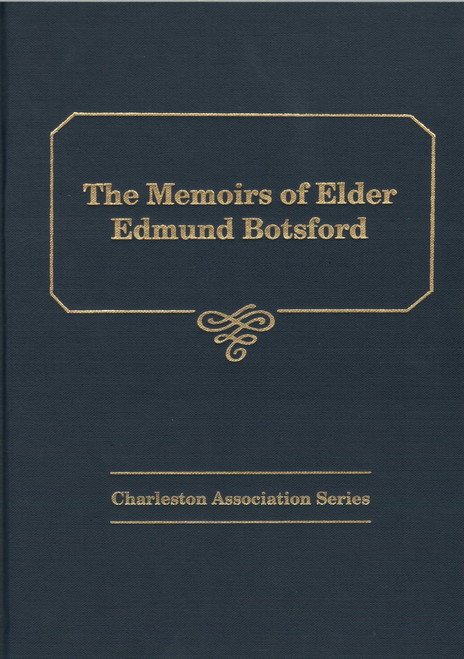 “Among the early Baptist ministers in South Carolina, one of the more influential and colorful was Edmund Botsford (1745-1819).  He was nurtured in the faith by Oliver Hart, was a contemporary and fellow-laborer with Richard Furman in the Charleston Baptist Association, and a spiritual father to William B. Johnson, John M. Roberts and others.  He was a capable minister, an involved worker in the Charleston Association, a writer and a mentor to young ministers.  Yet he is practically forgotten in South Carolina Baptist history...This reprinting of the Memoirs of Elder Edmund Botsford by Particular Baptist Press will help introduce him to a new generation of Baptists.” – J. Glenwood Clayton, from the Introduction

Edmund Botsford was an English-born immigrant to colonial South Carolina who rose from obscurity to become a key figure among Baptists in the South.  He was eulogized for having been a “faithful minister of Christ, and highly respected for his correct, exemplary conduct” (American Baptist Magazine, March, 1820, p. 310).  This biography has not been reprinted since the original edition of 1832, and is a valuable sourcebook for American Baptist history.  “Edmund Botsford lived at a critical time in the development of South Carolina Baptist life.  He was involved in making decisions that shaped the life of Baptists in the South for generations.” (from the Introduction).  Perhaps the most rewarding part of this volume however, is the spiritual counsel given by pastor Botsford in a series of letters to his various friends.

“Mr. Botsford had a strong faith in the Savior’s abiding presence, and he enjoyed much of the Spirit’s power in his heart.  His labors in Georgia were eminently blessed, and he is revered as one of the illustrious and heaven-honored founders of the Baptist denomination in that state and he has the same distinguished position in the Baptist history of South Carolina.”  (William Cathcart, editor, The Baptist Encyclopedia, 1881, 119).

251 pages.  This first volume in our Charleston Association Series has been completely retypeset and fully indexed, with 8 illustrations and a map.

Here's a recent blog post referring to this book: