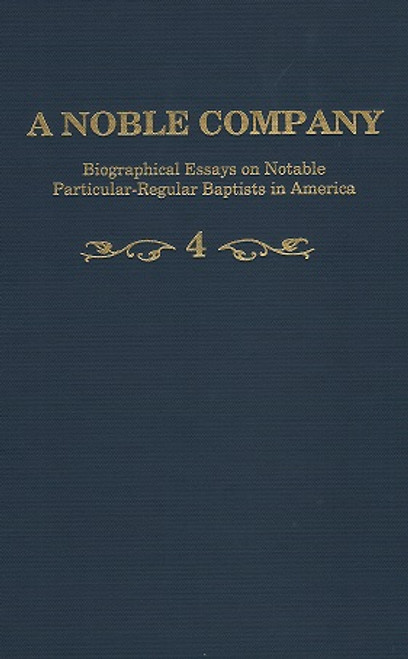 This fourth volume in our continuing series on what had been before the twentieth century the mainstream group of Baptists in America, the Particular/Regular Baptists, centers on those figures born during the early years of the Great awakening period. It was a wonderful time to come of age, and with these essays, readers will be introduced to persons whose lives were directly impacted by the revival, either through their own conversion experience or in how they were used of the Lord in the conversion of many others.

Though home missionary efforts had been a part of Calvinistic Baptist life in America since the middle of the eighteenth century (some might argue since the seventeenth century, with Roger Williams’ mission to the Indians), the interest in foreign missions was rapidly gaining ground among the Baptists and other denominations during the early Federal period of our nation. A large part of that interest had been stirred by periodicals, the most popular of which among our people, The Baptist Annual Register (London, 1790-1802), edited by John Rippon (1751-1836) and The Massachusetts Baptist Missionary Magazine (Boston, 1803-1816), edited by Thomas Baldwin (1753-1825), carried in their pages accounts not only of the Carey mission in India and others abroad, but those of an increasing number of pastor-missionary itinerants in this country. Some of the more outstanding among the latter in the early years―Samuel Shepard, Elkanah Holmes, Joseph Cornell, and Abraham Marshall, were featured on the pages of these magazines and something more of their interesting lives may now be gleaned in the following pages.

The struggle for religious liberty was still going on, most notably in New England and Virginia, where entrenched Congregationalist and Episcopal established churches, respectively, still enjoying state support and taxation, were not above exacting rigorous measures against Dissenters. At Saybrook, Connecticut on a cold day in February 1744, fourteen persons were arrested for holding a Baptist meeting, tried, and driven on foot 25 miles in deep mud to a prison at New Haven, “without fire, food, or beds, where they remained enduring dreadful sufferings, for several weeks.” And in Virginia, most notably, Baptist ministers like James Ireland, John Wetherford, and others, were still fined and imprisoned for preaching the gospel. Their stories are recounted here as well.

Along with these other essays is a fine piece of research on Squire Boone, Jr. (1744-1815) by Jeffrey P. Straub. In selecting Boone for inclusion in this series, I had relied on the long-standing historical consensus that he was a Calvinistic Baptist and the first of that order in Kentucky. Straub’s research has led to the conclusion that not only can we not ascertain with any certainty Boone’s theological persuasion, the evidence would suggest it is unlikely he was even a Baptist!

Concluding the book are four appendixes:

A. Abstract of Principles and Decorum of the Georgia Baptist Association, 1790.

B. An Exhortation to the Religious Education of Children (1795). Reprinted by the Philadelphia Baptist Association.