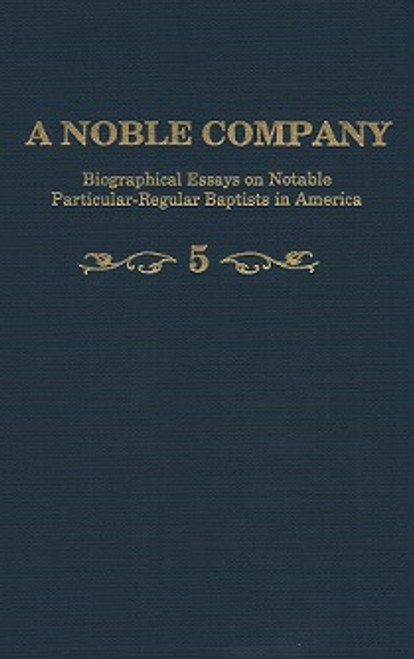 The twenty figures covered in this fifth volume knew much of what the English Puritan George Swinnock referred to as a God-given “heaven in the heart,” or godly experience. It was their prime motivation to live out their days in consecration to the Lord, accomplish their work and when the appointed time came, was a faith they could die by. R. C. Sproul, Sr. said that there is no such thing as an “untimely death.” If we understand Ecclesiastes 3:2 and Hebrews 9:27 correctly, then he is right. The Scriptures also remind us that there is “a time to be born,” and “a time to every purpose under the heaven.” It becomes us, as it did these fathers and mothers in the faith, to serve the Lord with gladness, and our own generation well. We serve each of these best by our faithfulness to His Word.

In addition to such leading lights as William Rogers of Philadelphia and Richard Furman of Charleston, this volume features the lives of two significant black Baptist ministers of the period, George Liele and Andrew C. Marshall. It is regrettable that to date there has been no thesis, book, or other collective work dealing exclusively with the rich Calvinistic black Baptist heritage in North America and the Caribbean, of which these two men bore such a conspicuous part. A full-length treatment on the subject by a capable and doctrinally sympathetic author is therefore a desirable object, long overdue.

Concluding the book are seven appendixes:

A. A Declaration of the Faith and Practice of the Morattico Baptist Church, Lancaster County, Virginia, January 17, 1778, Lewis Lunsford, pastor

B. The Doctrine of Justification. Circular Letter of the Philadelphia Baptist Association for 1785. By William Rogers

C. The power which a Gospel Church has over its members. Circular Letter of the Shaftsbury Baptist Association for 1789. By Caleb Blood

D. The Scripture account of the nature, business, power, and government of a Gospel church, in two branches. Circular Letter of the Shaftsbury Baptist Association for 1791. By Peter Werden, Stephen Gano and Justus Hull

E. The Covenant of Grace. Circular Letter of the Dover Baptist Association for 1793. By Lewis Lunsford

G. Confession of Faith of the First Baptist Church at Portland, Maine, 1801