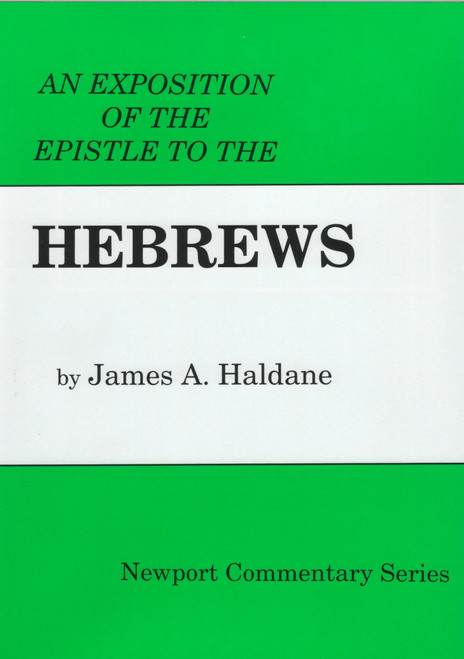 by James A. Haldane

This heretofore scarce volume by the esteemed Scottish Baptist James Alexander Haldane (1768-1851) deserves a place among the finest commentaries on this New Testament epistle.  Haldane had originally penned this work with a view towards writing a fuller exposition, but died before he could complete the task.  Nonetheless these “notes of an intended exposition” alone comprise a full and rich name of Biblical instruction.

Haldane’s correspondence from his latter years revealed “how much his mind was interested in the work” and “had cost him so much thought and pleasant labour.”  In the book of Hebrews, Haldane reminds us, “the consideration of the surpassing dignity of the Son of God, by whom God had spoken in these last days” (p. 44), is the focal point of this entire epistle.  “Believers ought diligently to attend to whatever the Lord Jesus has said in His Word.  The Gospel itself is the great truth, the belief of which is salvation, however great men’s ignorance in other respects may be; yet nothing which God has said is to be over-looked, but everything is to be attended to as far as it is understood” (p. 45).  Haldane, in faithfulness to the text, sets forth Christ as the one true Deliverer from sin as the Savior of His People.

C.H. Spurgeon’s classic Commenting and Commentaries was originally “compiled for the use of ministers” as an aid in guiding his pastoral students in purchasing the best Bible commentaries for their libraries.  Spurgeon was very well-read and well-qualified for such an appraisal.  In his introductory “Remarks upon the Catalog of Commentaries,” Spurgeon noted that the books “most heartily recommended are listed with *** after the book."  In this select category was James A. Haldane’s Exposition of the Epistle to the Hebrews (1860), to which Spurgeon appended the following comments: “a posthumous work issued not as a finished exposition, but as `notes of an intended exposition.’  Very valuable for all that.”

Out of print since the first edition of 1860, this quality facsimile reprint is produced from Spurgeon’s own personal copy, to which we've added Haldane’s work on “The Duty of Self-Examination.”  424 pages.