An Exposition of the Parable of the Sower in Matthew 13 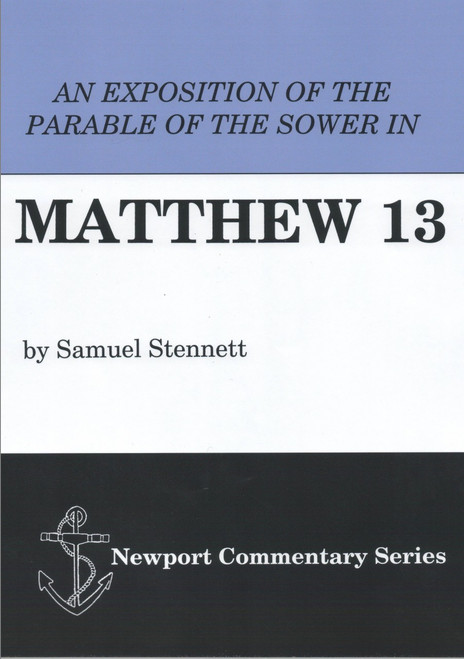 An Exposition of the Parable of the Sower in Matthew 13

An Exposition of Matthew 13:  The Parable of the Sower

This new edition of Samuel Stennett's Discourses on the Parable of the Sower, first published in 1785, has been completely retypset and includes the memoir of Stennett by Joseph Jenkins originally published in John Rippon's Baptist Annual Register in 1796.

In these six discourses, Stennett first gives a concise overview of parables in general and rules to assist in their interpretation.  He then proceeds to cautions regarding the use and abuse of allegory, which can be wisely applied to other portions of Scripture as well.  After discussing the leading ideas of this parable in particular, he carefully examines the four "soils" or kinds of hearers the Gospel comes to, which he designates as the inattentive, the enthusiastic, the worldly-minded and the sincere.

In addition Stennett provides much sound counsel to those who sow the seed, or "Word of the Kingdom" and those who attend on the ministry of that Word.

A careful reading of these exceptional discourses will enrich one's understanding a great deal not only on this key New Testament passage but on the Lord's parables in general.

Samuel Stennett (1728-1795) was among the last of a long line of outstanding ministers produced by the remarkable Stennett family in England.  His pastoral ministry extended over a period of 47 years at the Little Wild Street Baptist Chapel in London, first as assistant to his father Joseph Stennett and the last 37 years as sole minister to the congregation.  His influence through both his preaching ministry and his books was widely significant.