Anthology of the Early Baptists in Rhode Island 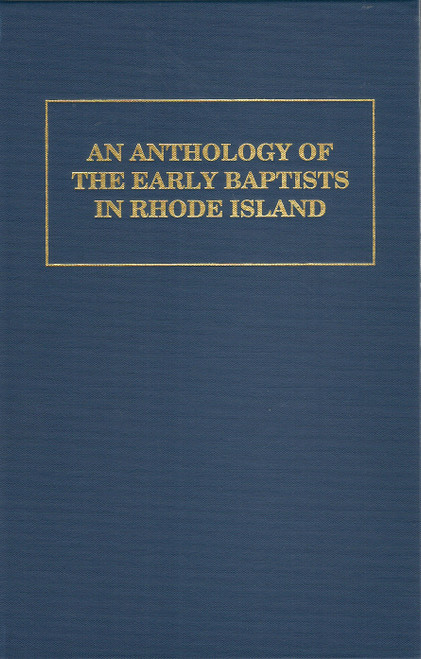 Anthology of the Early Baptists in Rhode Island

An Anthology of the Early Baptists in Rhode Island

A Sourcebook of Early Publications

Selected and edited by Terry Wolever

Rhode Island was the early center of American Baptist life and played a major role in denominational expansion in New England.  This volume contains facsimiles of some of the most significant works by and about early Baptists in America.

I. Materials For a History of the Baptists in Rhode Island, by Morgan Edwards

II. “John Clarke, Mark Lucar, Roger Williams, and the ‘New Baptism’ at Seekonk in 1649: To whom was it new? A historical inquiry,” by Terry Wolever

III. A Summer Visit of Three Rhode Islanders to the Massachusetts Bay in 1651: An Account of the Visit of Dr. John Clarke, Obadiah Holmes and John Crandall, Members of the Baptist Church in Newport, R.I., to William Witter of Swampscott, Mass., in July, 1651: Its Innocent Purpose and its Painful Consequences (1896), by Henry M. King

IV. Ill Newes from New-England: or A Narrative of New Englands Persecution (1652), by John Clarke

V. Report of the committee enquiring into the evidence as to the date of the First Baptist Church in Newport, R.I., presented to the Warren Baptist Association, September 13, 1849

VI. A Review of a Report, presented to the Warren Baptist Association, at its Meeting in 1849, on the Subject of the True Date of the First Baptist Church in Newport, R.I. (1850), by James N. Granger

VII. An editorial review of James N. Granger’s Review of a Report, presented to the Warren Baptist Association, at its Meeting in 1849, by Sewall S. Cutting, The Christian Review, January 1851

VIII. The First Baptist Church in Providence, Not the Oldest of the Baptists in America (1850), by Samuel Adlam

IX. An editorial review of Samuel Adlam’s The First Baptist Church in Providence, Not the Oldest of the Baptists in America, by Sewall S. Cutting, The Christian Review, April 1851

XI. The Mother Church: A Brief Account of the Origin and Early History of the First Baptist Church in Providence (1896), by Henry M. King

XII. An Historical Discourse on the Civil and Religious Affairs of the Colony of Rhode Island, (1739) by John Callender; with a Memoir of the author and additional biographical and historical material, edited by Romeo Elton (1838)

XIII. The Diary of John Comer Edited with Notes by C. Edwin Barrows; With an Introduction and a few Additional Notes by James W. Willmarth (1892)

XV. The Universal Register of the Baptist Denomination in North America, For the years 1790, 1791, 1792, 1793, and Part of 1794, by John Asplund, reflecting the Particular Baptist churches and associations in Rhode Island

Appendix A: John Clarke’s Confession of Faith, together with the Articles of Faith written by Obadiah Holmes in 1675