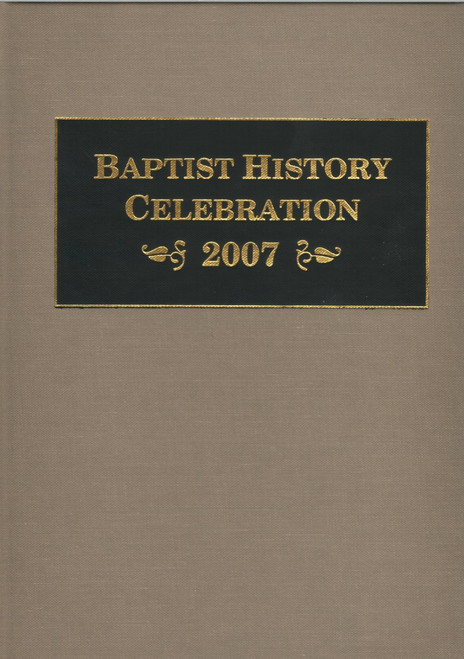 A Tercentenary Tribute to the Founding of the Philadelphia Baptist Association in 1707, Convened at the First Baptist Church of Charleston, South Carolina, August 1-3, 2007.

Hosted by the First Baptist Church of Charleston, South Carolina, and featuring a wide array of participants from various Baptist affiliations, this meeting consisted of five plenary sessions, each session having a portion dedicated to Baptist hymnody, two Baptist profiles on historic figures and a keynote speaker. There were also six breakout sessions on various aspects of Baptist history, four being held at the same time in different locations. A few of these sessions are not included, as they mostly involved audience interaction. An academic and gentle spirit persisted throughout the three-day meeting, to the benefit of all who were in attendance.

Contents of the book include:

Profiles of the following notable persons:

•The Seventeenth Century Old World’s Contribution to Baptist Hymnody in the New World, by Ron Owens

• “Singing is a Holy Ordinance of Christ:” Baptists Sing Their Confession, by David Gregory

•Thomas Dorsey and Lucie Campbell: The Birth of Gospel Music, by Charles Walker

•Transatlantic Patterns in Baptist Theology 1609 to 1800, by William H. Brackney

•Influence of the Philadelphia Confession of Faith on Baptists in America, by Thomas J. Nettles

•Baptist Responses to Theological, Social and Economic Issues in the Late Nineteenth and Early Twentieth Centuries (1865-1920), by William Carlson

In addition, many presentations on various other subjects including:

-Ministries to Native Americans and Women in History

This historic volume is cloth bound, with acid free paper. 663 pages. Illustrated with pictures of speakers, along with location photographs at the site of the meeting. Indexed.

. . . . I particularly want to commend you for the publication of the Baptist History Celebration book. I have just finished going through it. It is a great compendium of Baptist history, touching on such a variety of topics in Baptist history. It is a most valuable volume.  --Albert Wardin