Ministers of the Philadelphia Baptist Association 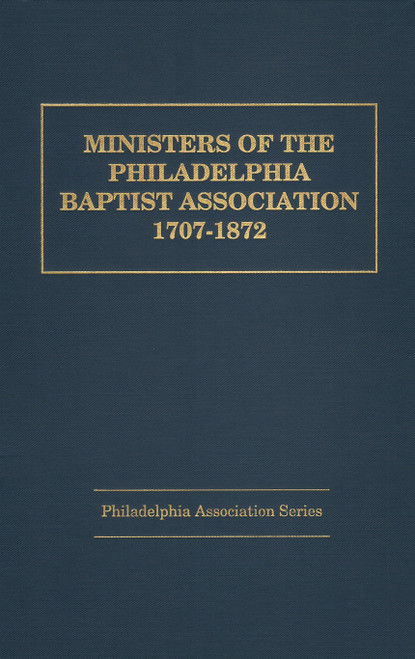 Ministers of the Philadelphia Baptist Association

Ministers of the Philadelphia Baptist Association, 1707-1872

Compiled and Edited by Terry Wolever

This volume is an effort to document biographical information on each of the 928 ministers and other key persons known to have been connected with the Philadelphia Association from its beginning on September 27, 1707, through December 31, 1872, together with the churches they were known to have served. This includes not only the ordained ministers, but those licensed to preach by member churches, whether or not they went on to pastor in the Association’s member churches or missions, as well as other persons who served in some official capacity either with or on behalf of the Association. Each subject is followed by a list of the primary references consulted for the information given, which, with a few exceptions, is alphabetically arranged. The most notable exception would be if there was a full-length autobiography, memoir, or extended article published on that person, it would be listed first. The information gathered from these references was then cross-checked for accuracy with the original published Minutes of the Philadelphia Baptist Association, 1769-1872 (there were no printed minutes before 1769) and the North Philadelphia Association of Baptist Churches, 1858-1872. The key to these references may be found on pages 656-700, at the back of this volume.

The year 1872 is noteworthy not only for its being the 165th anniversary of this oldest of Baptist associations in North America, but also for being the last year in which the general circular letter was issued, thereafter “the purpose of such letter being realized in the ‘Doctrinal Sermon.’ ” It therefore seemed like a good place to conclude this volume.

As could be expected, very little information was found on some of these persons, while on others there was an abundance of material. As will be seen, quite a number of the ministers at one time connected with the Association might during their lifetimes be found in pastorates throughout the country—North, South, East and West. They went where they believed the Lord would have them go and were hardly confined to the geographical region of the Middle Atlantic States.

This book represents the first such attempt to compile biographical information on every known minister connected with a Baptist association in America. It will make an excellent companion volume to A. D. Gillette’s Minutes of the Philadelphia Baptist Association, 1707-1807.

This is the fourth volume in our “Philadelphia Association Series.” Navy cloth hardcover with gold stamping on the cover and spine. Includes an Index of Persons, a comprehensive Index of Subjects, and an Index of Churches. xliv, 871 pages. 95 Illustrations.