The Life and Works of Joseph Kinghorn - 3 volume set 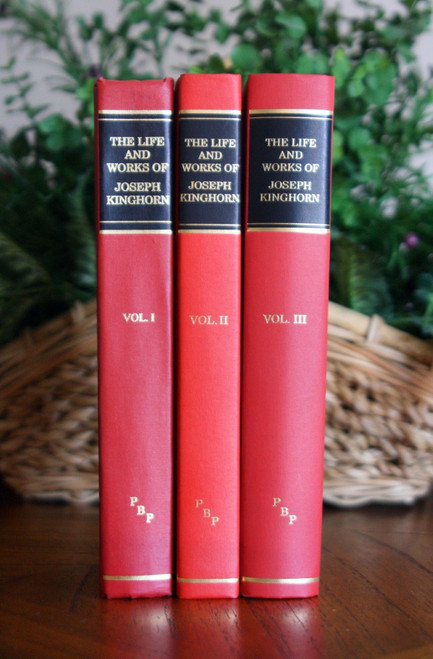 The Life and Works of Joseph Kinghorn - 3 volume set

A widely known and well-respected figure in his own day, Kinghorn has been all but forgotten and usually overlooked by most of the literature dealing with Baptist history and thought, though he was for years in the forefront of the doctrinal controversies of the early nineteenth century.  His life and influence are inseparable from the history of the Particular Baptists in England.

This instructive and edifying volume contains a reprint of Martin Hood Wilkin's Joseph Kinghorn of Norwich:  A Memoir (1855) and the two sermons preached by Kinghorn's fellow ministers on the occasion of his death in 1832.  The pofitable exchange of letters between Joseph Kinghorn and his pastor-father David Kinghorn constitute perhaps the most valuable legacy of this work.

Kinghorn was an early supporter of William Carey and the modern missions movement, as well as a notable scholar. His ability in the Word was much in demand by his peers and much respected by those with whom he differed. He was considered second only to John Gill in his rabbinical learning and was one of the godliest of pastors.

The Life and Works of Joseph Kinghorn - Volume 2

Joseph Kinghorn began a public writing ministry in the year 1795 which would continue for the rest of his life, motivated as he said by "the wish to do good and glorify God."  This volume contains two of his published works, some of which are now very scarce, covering a wide range of subjects and characterized by "Mr. Kinghorn's usual style of calm and careful investigattion and argument."  Originally appearing as separate publications or in the pages of the Baptist Magazine, these interesting works collected here for the first time in a single volume will prove to be a spiritual delight to the serious Christian reader.

The Life and Works of Joseph Kinghorn - Volume 3

Continuing with selected published works by this important English Baptist figure, this volume also contains book review and essays he was asked to contribute to various periodicals, as well as other collected material relating to his life.  A print of the original painting of Kinghorn by the famous Scottish portrait painter Andrew Robertson is reproduced in color along with a rare sketch of Kinghorn by the Norwich artist J. M. Johnson.  This book completes the set and contains a detailed index of Persons, Subjects, and Churches to all three volumes.

This three-volume set completes this phase of our planned series of volumes dealing with the life and works of Joseph Kinghorn.  In the near future, Lord willing, we will publish a separate two-volume set containing the complete communion debate between Kinghorn, Joseph Ivemey and Robert Hall, Jr.  Kinghorn's published works on that issue during the 1815-1827 period are therefore reserved for those volumes.

To read an excerpt from the book review on the 3-volume Kinghorn set by Michael A. G. Haykin of The Southern Baptist Theological Seminary, click here.