The Life Ministry and Journals of Hezekiah Smith 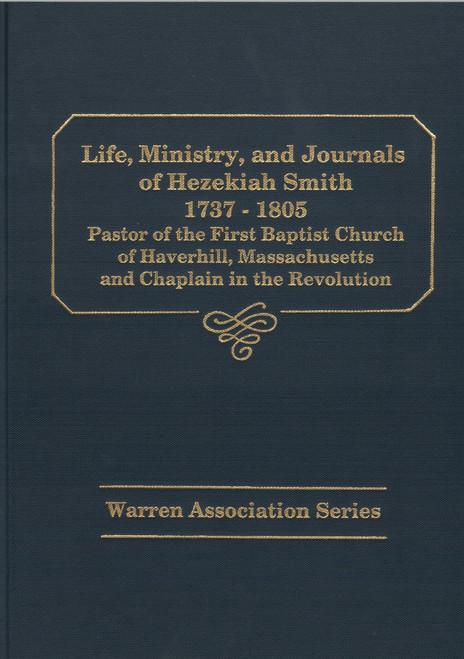 The Life Ministry and Journals of Hezekiah Smith

The Life, Ministry and Journals of Hezekiah Smith

Pastor of the First Baptist Church of Haverhill, Massachusetts 1765 to 1805 and Chaplain in the American Revolution 1775 to 1780.

It is unfortunate that a man who helped to found a notable American university, who possessed two earned and three honorary degrees from reputable institutions, who served his country well in the American Revolution as a chaplain, who traveled and preached in each of the original states, and who labored to establish his denomination as a religious force in new England is scarcely mentioned in the standard histories of the Revolutionary era.  This intrepid Baptist minister was a potent factor on the American religious scene for over forty years.  While most men would have been content with the successful pastorate which he held in Haverhill, Massachusetts, from 1764 to 1805, Smith’s wide itinerations carried his influence far beyond the little town by the Merrimack River.  Chronicled in a series of journals which he kept, his life and work strike an unusual portrait of a man whose story deserves the attention of the American historian.   —from the author’s introduction to the Journals.

Now published for the first time, and as the first volume issued in our Warren Association Series, this work will prove to be an invaluable sourcebook for any research into colonial Baptist history, and especially the growth of Baptist principles in New England.

Hezekiah Smith “by the eloquence of his preaching, and the weight of his character, bore down the strong prejudice against the Baptists, and was the means of abundantly extending their cause.”  —David Benedict, A General History of the Baptist Denomination in America (1813), Vol. I, pp. 318-319.

“It is not difficult to assign the place which Hezekiah Smith will always be regarded as having held among the Baptist fathers of New England.  It is safe to say that no man did more than he to give character to the denomination which had to fight every step of its way in securing for itself a foothold, and at last a permanent home in the Eastern States.”  —William Cathcart, editor, The Baptist Encyclopedia (1881),  p. 1066.

717 pages, with an extensive 70 - page Index of Persons (with over 2,200 entries!), Churches (including many Congregationalist & Presbyterian), and Subjects, all making the information contained in this new work easily accessible to interested readers.  Includes Illustrations, facsimile of sermons, and one map.

"Broome's introduction to Hezekiah Smith of Haverhill, Mass., a major figure of the Revolutionary era, is a masterpiece of scholarship.  Further, the publication of Smith's diary itself, located in the original at the Library of Congress and the Massachusetts Historical Society, is a gift to students of early America and American Baptists.  Smith's life and work interact with Hopewell Academy, the Philadelphia Association, College of Rhode Island, and of course the congregation at Haverhill.  His diary notes interaction with James Manning, John Gano, Samuel Stillman, and George Washington, to whet one's appetite.  This important source and its scholarship will be welcomed by all students of Baptistiana."  --William H. Brackney, Acadia University, as reviewed in The American Baptist Quarterly, Vol. 26, No. 3 (Fall 2007) : 346.